Miami-Dade, one of the U.S. most populous counties and home to the NBA team Miami Heat, has successfully annulled its partnership with FTX following the company’s collapse in November.

According to a report by the Miami Herald, a federal judge ruled that the naming rights agreement between both parties on the FTX Arena be terminated immediately. In June 2021, the two sides signed a 19-year deal worth $135 million for FTX to become the naming-rights partner of the playing ground of the three-time NBA champions, Miami Heat.

However, following the alarming revelations on the finances of FTX and the criminal fraud allegations levied against its CEO Sam Bankman-Fried back in November, Miami-Dade immediately took legal action requesting to sever their business relationship with the now-bankrupt company.

On Wednesday, January 11, the request was finally approved, resulting in the immediate removal of any representation of the FTX brand from the Heat’s home arena.

According to a joint statement by the Miami-Dade leadership and the Heat basketball team, efforts are aggressively underway to find another naming partner for the arena as soon as possible. In the meantime, the ground would be referred to as the Miami-Dade Arena.

FTX Loses Yet Another Partnership

The termination of FTX’s sponsorship deal with Miami Dade is just the latest to hit the headlines following November’s spectacular collapse of the $32 billion crypto empire.

On November 11, the Mercedes AMG Petronas F1 team announced the suspension of its partnership with the crypto exchange. Although the Formula 1 team had initially displayed some form of support for the embattled crypto firm, it made a reversal on its position, halting their partnership and removing FTX’s brand name from its race cars and other related assets.

It is expected that the coming months will be filled with similar events as the FTX crisis is still far from a resolution. Late last year, the once-mighty crypto firm filed a motion requesting the immediate termination of over 20 marketing deals, including the now-defunct naming rights agreement of the FTX Arena.

Other popular deals on the list included a sponsorship deal with the reigning NBA champions Golden State Warriors and an ambassadorship deal with Brazilian fashion icon Gisele Bündchen.

How The Crypto Market Is Faring After FTX’s Collapse

Following the crash of the FTX exchange last year, the crypto market took heavy losses, culminating in a value of over $180 billion. However, there has been a steady market recovery in the last few weeks.

Just yesterday, the market leader and premier cryptocurrency, Bitcoin, traded above $20,000 for the first time after FTX’s collapse. Although this does not necessarily mean the storm is over, it could be interpreted as a sign of a future price rally in the coming months. 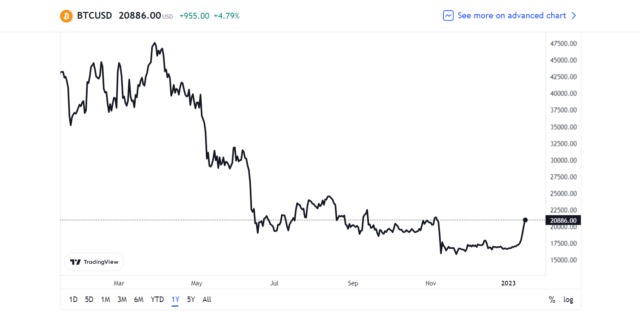